Years ago, when I joined Twitter in search of fans of the TV show “Lost” to interact with, I didn’t expect this simple site to become such a monumental part of my life. I don’t know what I expected, really. I guess I thought I might find conversation and interaction. And I did get plenty of that. But I also got so much more.

I’ve had a hard time making a definitive list of the ways that Twitter has changed my life because I’m sure that I’m not even aware of all the ways. From small stuff, like helping me learn to write concise, eye-catching headlines, to big stuff, like meeting my favorite musician, Twitter has certainly done a lot for me.

As strange as it might sound, I truly believe that had I not joined Twitter and found the community and sense of belonging that I did, I would be a very different person than who I am today.

Alas, I’m going to do my best to create something of a list. This site sure has done enough for me. The very least I can do is share what it’s done, and hope that by sharing, I can help inspire others to find ways to utilize their time on social media, too.

Without further ado, here are some of the ways that Twitter has changed my life, for better or for worse:

1. Twitter helped me meet my favorite musician: I’ll start with the most obviously positive thing Twitter has done for me, because in my eyes, it’s probably never going to get any better than this. Because of Twitter, I was able to meet my favorite singer/songwriter in the world.

Here’s how it happened:

So, I play the ukulele. (And the guitar, actually, but that’s beside the point.) Every now and then, I post covers of songs on a YouTube channel. I don’t have many subscribers and I don’t get too many hits, but I post links to the videos on my social media accounts and my friends and family seem to like what I do. Plus, it’s fun, and I enjoy it, so it’s worth doing.

Josh Ritter, an Americana-style singer/songwriter had a new album coming out in March of 2013. He released his first single, a really lovely song called “New Lover,” and I fell in love with it. On a whim, I posted a simple ukulele cover. It was seriously nothing fancy. Just me, sitting in my college dorm room, wearing a shirt with characters from the film adaptation of “The Hobbit” on it. (I’m still not sure if I’m embarrassed or proud about that. Ah, screw it. Of course I’m proud.) I posted the cover, linked it to my friends on Facebook and Twitter, and didn’t think anything else about it for a while.

And then, without any warning, while I was sitting in class one day, my phone started blowing up with text messages and calls. Everyone was asking if I had checked Twitter or Facebook lately. I was (surprisingly) being a decent student that day, so I hadn’t. When I checked, I found that Josh Ritter had posted links to my cover. 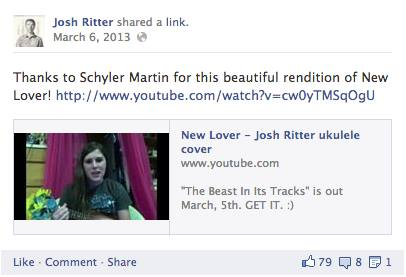 I was over the moon.

To this day, I’m not sure if I’ve ever been happier in one moment. My favorite artist had noticed me. He had complimented me. My video jumped in views and nice words from other people who had watched it started pouring in. I would’ve been ridiculously happy even if this story ended there, but it doesn’t.

Later that same day, I got a direct message on Twitter from Brian Stowell. Brian told me that he sold merchandise at all of Josh Ritter’s shows. He said that he and Josh (as in THE JOSH… !!!!!) had loved my cover of the song. He asked if I was planning to come to Josh’s upcoming show at the Cat’s Cradle in Carrboro, North Carolina. As a major fan, I had already bought my ticket. When I told Brian that, he invited me to come early to the sound check and meet Josh.

That’s exactly what I did. I met Josh, talked to him for a while, took a picture with him, and got my own private performance at the sound check. It was probably the best day of my life. I still can’t believe I was so lucky.

But again, my luck didn’t end there. Later in the year, Josh was playing a show in Charlotte. This venue was different from Cat’s Cradle. It was a seated, quite high-class show, and it was considerably more expensive. I wasn’t sure I would be able to make it, but Brian contacted me and asked if I wanted tickets.

I picked up two complimentary tickets at the door, got a great seat right in the front, and enjoyed an amazing show for free. I still keep in touch with Brian. He’s a great dude and anytime he’s in town, I go see him.

And it all happened because Josh Ritter saw my tweet.

(By the way, if you haven’t heard Josh Ritter’s music, go listen right now. The man is a damn genius and a poet.) 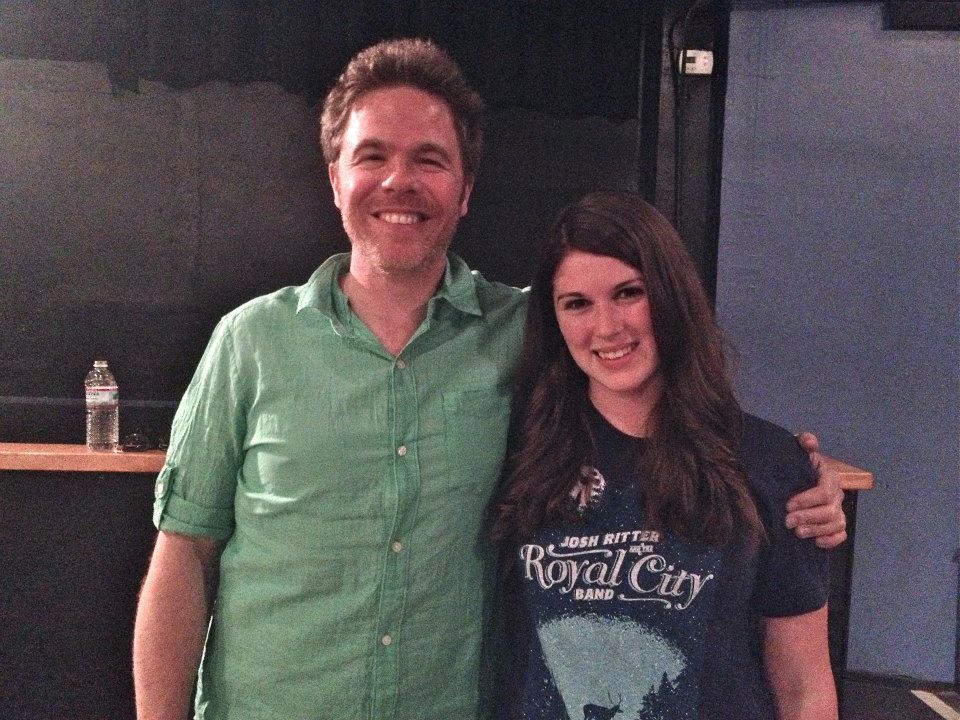 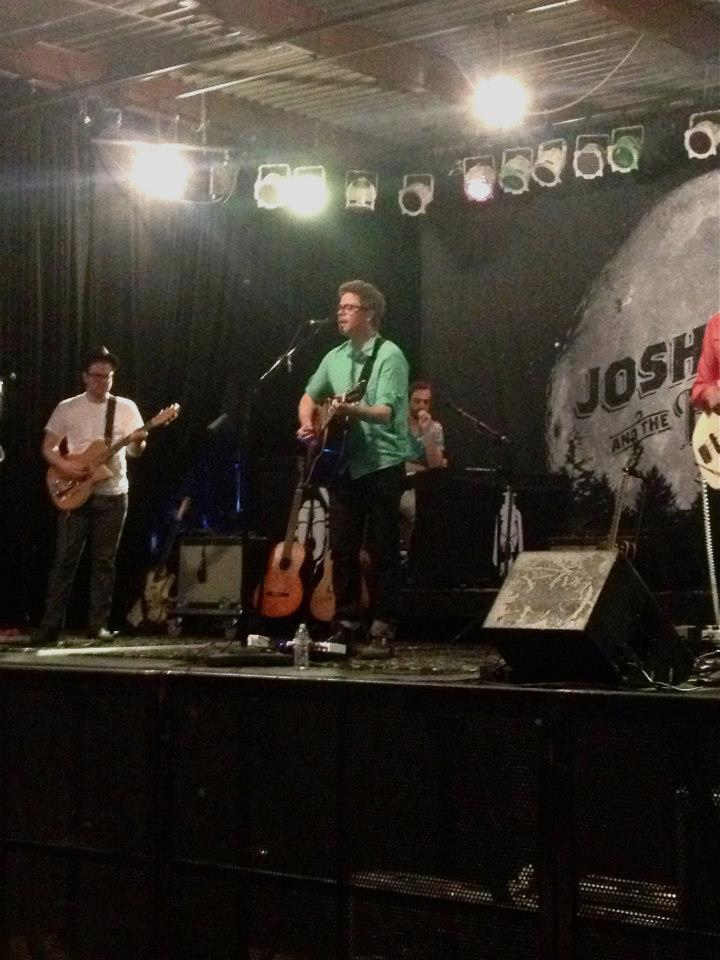 2. I have made lasting, legitimate friendships: Obviously this one is nowhere near as explosive as meeting my favorite musician, but in the long run, this is probably the best thing Twitter has done for me. Like I said, when I joined, I expected to chat with other TV fans, but I didn’t expect to make friends that I would hold on to and work with in the future.

Because of Twitter, I have close friends from all over the world. I have a good friend in California that I text regularly. We’re both students and lovers of film and screenwriting, so we always have plenty to talk about.

I also have a good friend who lives all the way in England. He’s a delightful guy and we’ve talked about books, TV, and just about everything you could think of. For Christmas, he sent me a rad “Sherlock” T-shirt and a gorgeous bust of the tenth doctor from “Doctor Who.” He’s an amazing guy, and I hope to always stay in touch.

I have another good friend from St. Lois who I once worked with on his “Game of Thrones” podcast. We still stay in regular contact, and for helping with the podcast, he bought me a season of “Game of Thrones” on DVD. It was awesome.

Another friend is from New York. She’s one of the first people I ever talked to on Twitter, and we’re still in touch. I feel like I truly know her. If I bumped into her on the street, I don’t think it would be awkward at all. After all, we’re friends. We would just slip right into our usual conversation.

I wish I could mention every person specifically who is dear to me from Twitter, but I would go on forever. I follow 572 people, and I often try to cut that number down, but I find that I can’t let go of anyone. These people are my friends. They’ve been there for me through all kinds of hardships, and I think many of them know me as well, if not better, than most of my “real life” friends do.

3. Twitter has given me job opportunities: I’m writing this article right now, solely because of Twitter. I’ve made a brand for myself, a name. Because of my heavy use of Twitter, people are able to find me on the site, and it’s opened up the door to so many opportunities.

I have written freelance articles because someone reached out to me on Twitter. I’ve become a regular contributor on an entertainment blog. Currently, I’m working on a startup movie review site called “Audiences Everywhere.” It’s a project that I’m passionate about and glad to be involved with, and I never would’ve known about its existence if it weren’t for Twitter.

As a college student and an aspiring writer, all of this experience is fantastic for me on so many levels. I’ve improved my writing, made lasting contacts, made some money, and had a lot of fun.

If you’re looking to break into any kind of industry, I highly suggest you make a Twitter account that revolves around your interests. Tweet at people. Talk about the things you enjoy. Post samples of your work. You never know who might notice.

4. I’ve talked to some of my favorite celebrities: Speaking of being noticed, Twitter is the best place to connect with your favorite actors, actresses, writers, comedians, and musicians.

Simply because I tweeted at them, I have talked to some amazing people.

Off the top of my head, here are some of the people I’ve interacted with on Twitter:

5. I now have a pretty serious identity crisis: Okay, so it can’t all be great, could it? Twitter has done amazing things in my life, but it’s also seriously confused my sense of self.

Anyone who knows me probably knows my Twitter screen name. There are a lot of people who only know me by my screen name. For many, I am simply “SkyyTweet.”
Twitter has become a large part of my identity.

I don’t know exactly how it happened, but somehow, I became two people. Two identities. They are alike in a ton of ways, but there are subtle, important differences. I’m not sure if I’m Schyler or SkyyTweet. Or both. All I know for sure is that the two are not exactly the same.

For example, here are some quick facts about Schyler:

And here’s an introduction to SkyyTweet:

You get the point. I am not the same person on Twitter that I am in real life. At least I don’t feel like I am. In many ways, SkyyTweet is the person I wish I could be. She’s confident. She’s definitely going somewhere. She’s got her life and her goals figured out.

Learning to balance these identities is something that I don’t think I’ve mastered yet, but I’m working on it. I’m starting to realize that I am, in fact, both Schyler and SkyyTweet. I’m not faking anything online. I am witty and confident. I do know a lot about film and television.

But I’m not faking things in “real life” either. I’m confused and unsure. I’m 20. And that’s okay.

Yes, it’s true that none of these things could’ve happened without me reaching out and taking some chances, but as a platform, Twitter has been the reason that a lot of great things have happened in my life. Sure, it’s been confusing too, but when you get right down to it, I owe a lot to Twitter.

So again, I say. Thanks, Twitter. I appreciate it all.

You can follow me @SkyyTweet. I’m there a lot.

[…] follow. She may even start clicking around to follow anyone that mentioned her favorite celebrities.Twitter changed the life of my friend Schyler Martin and, honestly, it has opened up plenty of opportunities for myself as […]